Growing up with Juvenile Idiopathic Arthritis

Every year more than 200 Swedish children are diagnosed with juvenile idiopathic arthritis (JIA), also known as childhood arthritis, a rheumatic disease that affects the joints and can cause severe pain. For those affected the disease can cause considerable suffering and result in a reduced quality of life. To gain a greater understanding of how JIA affects young people we have spoked with Clara Laurell, who has lived with the disease for several years.

What were your first symptoms and how did you get diagnosed with juvenile idiopathic arthritis (JIA)?

“It all started when I was 10 years old. I competed in swimming and trained several times a week and got an inflammation in my shoulders that wouldn’t go away. So I started visiting a physiotherapist in the hope of getting better. I wanted to get back to swimming again, but after 2 years I realised that wouldn’t be possible because my shoulders never got better.”

“A couple of years later my fingers started hurting. At school I got an iPad because I had a hard time holding a pen and could no longer read what I was writing. When my fingers got really bad we talked to my aunt who is a pediatrician in Lund and she suggested we should write our own referral. Until then I had gone to orthopedists and had X-rays but no one knew what it was. But when the pain started in my fingers I only needed a couple of visits to the doctors to be formally diagnosed with JIA.”

How has your illness developed since then?

“It has got much worse. The inflammation and swelling has become more aggressive. In the beginning I had pain in my shoulders and fingers but now it has spread to my knees, hips, jaw, back and neck. Basically my whole body.”

What does a normal day look like for you?

“It can vary. Some days I’m in the hospital but otherwise things are relatively normal. Last year I was much worse but this year I have learned to live with the disease and have adapted things in my everyday life.”

“But I don’t go to school full-time and I have not participated in sports at school since I first became ill.  I train instead with my physiotherapist or at the hospital’s rehabilitation facility. At school I use my iPad to take photos of study material and I take oral exams in order to avoid writing. My jaw is a constant problem. It always hurts and I have a hard time chewing. When it’s at its worst mum and dad pick me up from school so I can eat something nutritious at home. The pain comes in waves.”

“I can’t drive a moped because of the pain in my fingers. But I have bought a microcar with my own money which I can drive to school and I can also bring my crutches with me when I need them.”

“Now I am also the co-owner of a horse and compete in dressage. My goal is to compete in a slightly higher competitive class in the long run.”

Does the disease have any other consequences for you in addition to the purely physical effects? Has it hindered your social life, limited what leisure activities you can do or affected your mental health?

“I got really sick in my teens and it was very hard. I couldn’t go to school, walk long distances or eat what I wanted because of the pain in my jaw. I couldn’t go home with friends after school, which made me feel depressed.”

“I sleep between 12-14 hours a day but when it was at its worst I could sleep all day. You just get tired of the pain.” 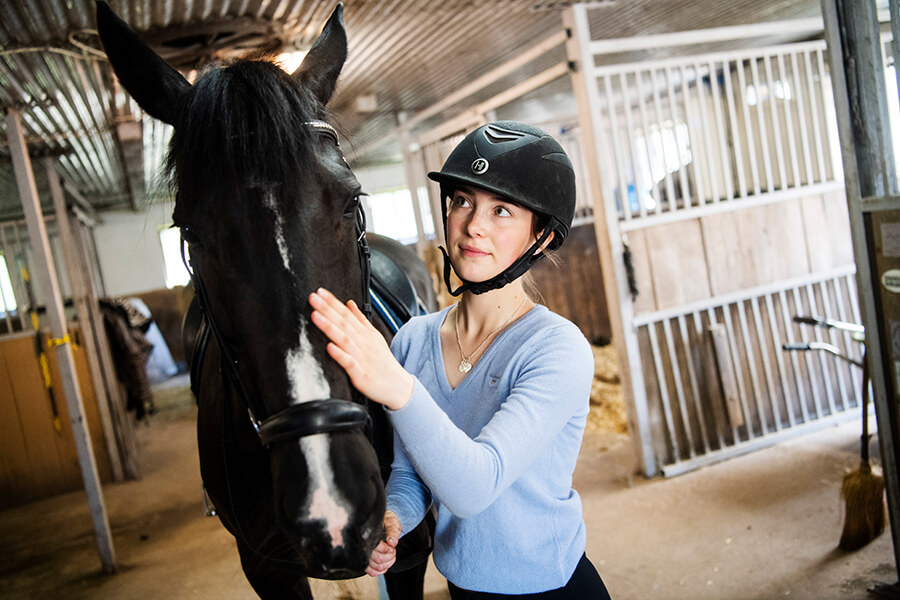 “Last year I sold my own horse Daisy because I could no longer take care of her myself. But together with my mum and dad I realised that I needed some type of motivation. Something to fight for outside of the disease. Now my friend Ellen and I have bought a horse together. It’s working out really well and I am so happy to be a co-owner because now we get to share the responsibility.”

How are you being treated today and how do you think your treatment could be improved?

“I get a low dose of chemotherapeutic drugs in tablet form once a week which I used to get in syringes. At the hospital I also get a biological drug via a drip.

“Despite this I still need to take a lot of painkillers and get cortisone injections because I always have a joint that hurts. I really wish I could avoid that.”

What are your plans for the future and are they affected by your illness?

“I’ve been interested for a long time in becoming a pediatrician. Having been ill myself I have come to realise how much the people working in healthcare matter to me. In the future I would like to matter just as much to children who become ill. From time to time it all feels hopeless but I know that most things work out in the end. It’s just a matter of adapting and hopefully I will be able to work full-time as a pediatrician one day.”

What would it mean for you to be completely symptom-free?

“I could focus on my own achievements and realise my dreams and goals. I could skip all the hospital visits, which I have had to make usually at least once and sometimes several times a week.”

“But it is a difficult question to answer because I am so used to always being in pain. Rheumatism has made me stronger and I have learned a lot. I wouldn’t want to be without the amazing staff and doctors at the hospital. I have very mixed emotions.”