The three largest shareholders in terms of voting rights (considering ownership groups) as of 1 September 2022 are the founders of the company represented by Olle Hernell, Christian von Koenigsegg and companies, and Flerie Invest AB. Christian von Koenigsegg relinquished his seat to the company's fourth largest shareholder, Adam Dahlberg and family.

Shareholders are welcome to submit proposals and views to the Nomination Committee via email to valberedning@lipum.se. To ensure that proposals can be considered, these must be received in good time before the annual general meeting, but no later than 28 February 2023.

About Us
Lipum AB (publ) is a clinical stage biopharmaceutical company specialized in discovery and development of a novel treatment for chronic inflammatory diseases. The lead candidate SOL-116 is a humanized antibody designed to provide efficacious therapy by blocking a previously overlooked target molecule of the immune system (BSSL). SOL-116 is in clinical stage supported by solid data for rheumatoid arthritis. Lipum also explores other inflammatory diseases with a high unmet medical need. The company is based in Umeå, an excellent life science cluster in Sweden. Lipum’s unique approach has attracted international attention, including a major European Commission Horizon 2020 grant. The company's share (LIPUM) is traded on the Nasdaq First North Growth Market. Certified Adviser is G&W Fondkommission. 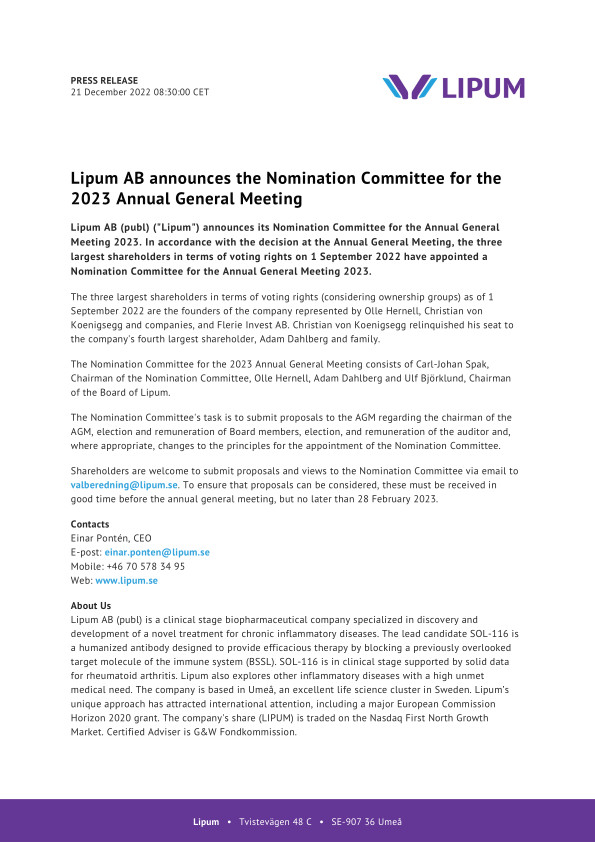